Those pesky Turks . . . or, get ready to see lots of forts if you visit Eastern Europe

A theme running through our visit to Eastern Europe was the centuries-long harassment of the good people of Romania, Bulgaria, Croatia, etc., by the Ottoman Empire. The story is that periodically, the Turks would gather their troops and tear up past the Black Sea to give their northern neighbors a hard time. They’d wreak havoc, burying their enemies in footstools, then taking over, making the defeated locals decorate their buildings with minarets and eat falafel.

At least, that’s my take on the situation. I visited Wikipedia to try to get a more accurate handle on the history of Bucharest, Romania, where we started our vacation, but it was frankly more than I was willing to tackle for this story. Suffice to say that practically everyone, with the possible exception of Genghis Khan, ripped through the area at one time or another. And while it’s called “Romania,” it appears that the Romans didn’t really leave a big footprint. 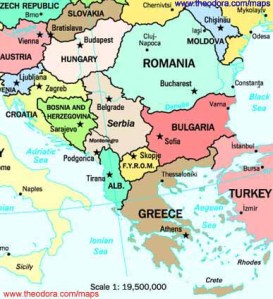 I just wish I had been forewarned about the Turk situation before we started taking our excursions. I would have taken more pictures of the fortresses that seemed to pop up everywhere we went. I didn’t pay enough attention early on, not being big on military history.

Not fortress-related but definitely pesky Turk-related, in the quaint Bulgarian village of Arbanassi we visited a nondescript old stone building that turned out to be the semi-disguised Bishopric Nativity Church. Inside this poky building the walls and ceilings were completely covered with the most stunning and vibrant iconic images! We couldn’t take photos inside the church, so below is a poor photo of a couple postcards I purchased. Now, why wasn’t the outside as gorgeous as the interior? It was to hide its beauty from the Turks so they wouldn’t be as tempted to destroy it. 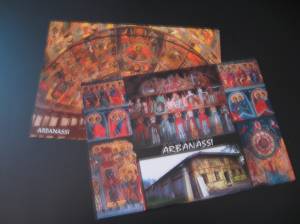 Anyway, as we departed Arbanassi, we stopped to see a gigantic fortress spanning a ridge above the rolling countryside. It seemed to go on for miles and was quite picturesque, but yours truly was more interested in getting to the next stop where we were promised shops with local handicrafts in the Old Town. Okay. So I’m a girl – shoot me.

The next morning, there was an optional excursion from the ship to yet another fortress in the mountains nearby before we’d spend the afternoon cruising through the Iron Gates Gorge, or Kazan Gorge. Again, my dear cousins and I chose to look for cappuccinos and shoes in the riverside town of Vidin when we heard there was some serious uphill hiking to check out the fort. There were a couple of extremely good-looking men sitting at a café table next to ours. Half the people in town stopped to say hello to them. Oh. Later on we heard the fortress was awesome. Instead, here’s a pic of the cute Bulgarian guys (this doesn’t do them justice; I was trying not to be too obvious).

The next morning we arrived in Belgrade, Serbia and – you guessed it – immediately set out with the local guide to visit the city’s fortress. Belgrade also has a huge, beautiful Orthodox church under construction, a pretty, historic downtown and a reputation for a happening night life. Our adorable Viking Program Director Nevena Cvarkovic is from Belgrade and here she is on the bus: 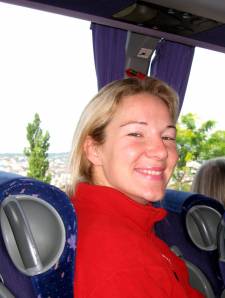 The delightful Nevena from Viking Primadonna 2012

Boy. I seem to have a lot to say about fortresses and Turks without saying anything of value. I hope someone will comment, “Oh, Kate! It has ENTERTAINMENT value! Who cares about historical facts?”

We saw another fortress in Osijek, Croatia, and by that time, I realized this was something we could pretty much look forward to at every stop. Each country thought it was the last bastion against the marauding Turks, but sure enough, the Ottomans would take over one spot in, say, Bulgaria, then move on to stomp out another group further north. I’m not sure how far the Turks actually went, but my favorite variations on the fortress theme occurred in Croatia and Hungary.

On our way to Osijek, we stopped at a farm house in a little village along the way. The owner of this place would be a millionaire in the US. Talk about entrepreneurial! He apparently had some sort of canoe-rental/camping thing going on, plus bed & breakfast accommodations in his home. He had a large sort of rec hall set up with chairs and – best of all – a handful of sparkling clean bathrooms making it the ideal place for tour buses like ours to stop. After using the facilities, we sampled some local wine and snacks, then rushed to the tables on one side of the room to buy wine, jars of jam, and a variety of Croatian souvenirs from the farmer and his family.

This entertaining farmer gave a PowerPoint presentation, telling us a little about Croatia with much pride and a great sense of humor. Best of all was when he told us about how the Croatians stopped the Turks in their tracks by wearing scary, wooly masks and screaming at them like Braveheart warriors. I said to myself, now this is far more exciting than a pile of stones! Wouldn’t you love to have seen hundreds of screaming, wooly creatures charging toward the Turks, making them turn tail and run for the hills in horror?

Then in southern Hungary, where flat fields of grain and grasses made for great farming but poor defenses, the Turks were met by a different breed –dashing Hungarian horsemen. Surrounded by fields as far as the eye could see, Puszta is a Hungarian ranch where horsemen dress in native costumes to demonstrate how these masterful riders defended their land.

Cracking their whips and hollering, the horsemen galloped around a large, dusty track in front of a little grandstand of observers. Years ago, brave horsemen like these amazed and effectively fought off the invading Turks by being able to ride backwards, shooting arrows at the enemy as their specially trained horses thundered across the plains. I was especially impressed with the guy who straddled two horses in the rear, standing with whip and reins in hand as the team of horses ahead charged around the ring. 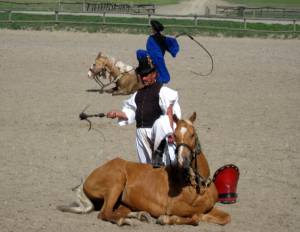 My cousin Linda called it the Hungarian rodeo. And Cousin Carole thought it was too dusty. I thought it was awesome. There was more wine, more snacks, and more tables loaded with food, wine and tchotkes for sale after the show.

Having now seen a fair sampling of the fortresses and scary costumes and dashing horsemen of the Balkan States, I find myself more determined than ever to put a trip to Turkey even higher up on my bucket list. I mean, wouldn’t you like to hear the other side of the story, too? If you visit fortresses in Turkey, do they tell tales of the marauding Huns and Slovaks? I can hardly wait to find out . . . .

Freelance writer and event planner by trade . . . mother/daughter/sister/friend . . . passionate traveler . . . compulsive reader
View all posts by katemahar →
This entry was posted in Uncategorized. Bookmark the permalink.

3 Responses to Those pesky Turks . . . or, get ready to see lots of forts if you visit Eastern Europe