A few tips on tipping: #1 – Do you want frites with that?

I don’t know how, when or where the custom of tipping others for their services came about. I picture it starting with a clever, yet scruffy Cockney boy holding the carriage door open for a duke or earl as he leaves his club in the city. The gent drops a penny in the poor boy’s palm and murmurs, “For you, little chap!” The youth sweeps his tattered cap across his chest in a deep bow and pipes, “Thank ‘e kindly, guv’nor!” Thinking he’s onto a good thing, he hangs around to repeat the experience with the next gentleman, brags about it later to his friends . . . and tipping is born. 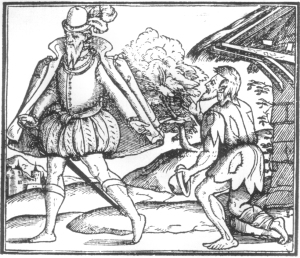 tipping. In the meantime, I think this version is completely plausible, don’t you?

At any rate, for many people, tipping associated with travel can be a bit confusing. Tipping when traveling overseas is even more problematic.

My first piece of advice to you is this:  if you can afford to travel, you can afford to tip the people who help you out along the way. If you need to watch your pennies while you’re on the road, start with refilling your water bottle at a fountain instead of buying several new bottles a day. Put that money toward tipping the people who probably couldn’t dream of taking the vacation you’re currently enjoying.

In the U.S., you know as well as I do that waiters and waitresses don’t even make minimum wage. Right? Sometimes they make so little, that salary may not be enough to cover their withholding taxes and social security deductions, which are based on what their combined income of wages and tips is estimated to be. 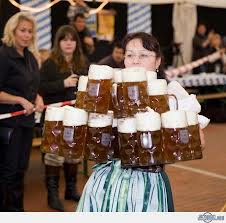 I think you should tip your server 15% for showing up, bringing your food, and not being obnoxious. Tip a pleasant, helpful server 20%. Don’t mess with a calculator. Round up. Oh – and even if you’re paying with a credit card, your server will truly appreciate it if you can leave your tip in cash. In some not-so-classy restaurants, the owners will deduct whatever percentage they have to pay to Visa or American Express, so your waiter does not get the entire amount you think you’re paying. Really unscrupulous employers may not even pay out tips put on cards. It does happen.

In Europe, tipping in restaurants is trickier. Generally speaking, waiters (I don’t 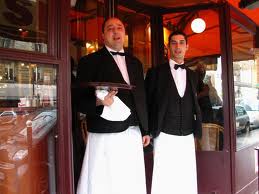 remember seeing many waitresses, except in little coffee shops, now that I think of it) make a decent living wage. A waiter in France considers his job his career and prides himself on his knowledge and service – and does not rely on tips from us to pay his bills. Having said that, when you get the final bill, it’s good form to round up and leave a little something – maybe 10%.

If your server is especially kind and helpful as you try to work your way around a foreign menu and wines you’re not familiar with, then tip a bit more. Say thank you. Be a charming American. Ugly Americans are old hat.

Nothing like lying on the bed watching a movie with your $15 club sandwich and a beer, right? This is as good a reason to leave home as any.

It used to be that the smiling waiter would deliver the grub, you’d sign the slip to charge it to your room, hand him a few dollars for the delivery and that’s all she wrote. Today, I suggest you look at the bill before you sign it to see if you are being charged a delivery charge and/or service charge by the hotel. 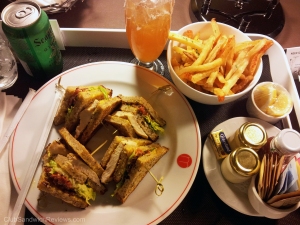 The service charge, which is usually somewhere between 15-20%, should be the waiter’s tip. If you feel that’s sufficient for the delivery of your meal, then you’re done. Right?

But wait – before you close the door and dig in, ask the wait person if she actually GETS some or all of that service charge as a gratuity. If she does get the full amount, she will tell you and probably thank you for asking. It’s nice to know that people care.

If she does not get that service charge, or only a portion of it, then you may want to write in her tip on the line that says “additional gratuity” or “tip.”

The interesting – and tricky – thing about this is that all the bills have that blank line for a tip, whether the waiter gets the service charge or not. Don’t make the mistake of thinking because there’s a space for a tip, you’d better write it in.

Conversely, just because there’s a service charge, don’t assume the waiter gets it. If you ask, the hotel may claim it’s a charge they add to cover their own costs of getting hot food to your room. As I said, it’s tricky. All you can do is trust the waiter to tell you the truth, and chances are that most of the time, he will.

I’ll share more ideas on tipping in the weeks ahead. In the meantime, for the best advice on tipping customs in Europe, I always defer to travel guru Ricks Steves. If you’re wondering about how tips are handled elsewhere, try Googling “tipping in Thailand” or wherever you’re headed and you’re sure to get any number of helpful hints on-line.

Freelance writer and event planner by trade . . . mother/daughter/sister/friend . . . passionate traveler . . . compulsive reader
View all posts by katemahar →
This entry was posted in Uncategorized. Bookmark the permalink.