So, you’re the first to hear

I have been noodling around with the idea of starting a niche travel company for years. I bought an online tutorial on how to set one up and occasionally daydreamed about how I’d actually do such a thing.

I didn’t get far until I mentioned it to my dear friend, Ginny Carmichael Schneider, last spring. Ginny liked the idea as much as I do, and we quickly came up with several ideas for themed tours to Europe.

I’m happy to announce that our first tour will take place in England next fall! I’ll be going over for a site visit to work out the logistics on November 1. We have a company name that fits us to a tee:

That’s French for “two peas,” or — two peas in a pod. Which we are. It’s like that sappy line from the movie Jerry Maguire, “You complete me.” I know, I know. But it’s true in the sense that we bring complementary skill sets to the enterprise. (Well, true in lots of other ways, too, many that make us laugh like lunatics). But for Deux Pois, our first venture will show you what I mean.

Ginny is an artist who works with wool and has become very interested in felting, which is 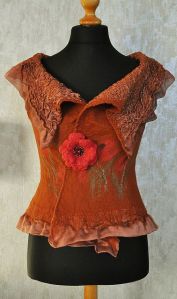 kind of a hot craft topic these days. Here’s a link to her Pinterest board to give you an idea of the fascinating and gorgeous art and apparel that are being made using this craft.

We agreed that Ginny would search for and select a European felt artist who has been published and also teaches. She found a craftsman in Yorkshire, England who has agreed to conduct an exclusive two-day workshop for our group.

So who will “our group” be? Our tag line of “Live large. Travel small.” really speaks to our objective. I would describe our traveler for this tour to be someone who is passionate about felting and wool crafts and would love the chance to learn from an expert. This also is someone who has probably done a fair amount of travel (and loves it), has most likely visited London and other popular attractions in Europe, and is intrigued by the idea of going to places that are just a bit off the beaten path.

Traveling small refers to our group size, which will be no more than 10 people. We’ll give our participants the kind of personal attention and concierge services you don’t usually find in a large tour group.

I’ll be writing more about our philosophy and why we are creating trips and conducting them in a way we’d like to experience travel ourselves on our Deux Pois blog.

So that’s it in a very tiny nutshell. In November another dear friend, Bernadette Knight, is going to take the ferry over from her home on the Isle of Man and join me on my research through Yorkshire, the Lake District and Liverpool. The Isle of Man is going to be an add-on to our tour, since Bernadette has contacts in the wool craft community on the island. How’s that for a different destination?

And since I haven’t seen Bernadette since visiting Ireland some years ago, I’m thrilled we can spend some time together.

You’ll be hearing more, and I’ll be creating a Deux Pois blog, of course, that  I’ll include here when it’s ready for viewing. This site will not be about Deux Pois, by the way, though I will no doubt mention it now and again.

I just wanted you to be among the first to know about this exciting new adventure in my life. Thanks for joining me here!

12 Responses to So, you’re the first to hear