In the latest issue of my favorite travel magazine, National Geographic Traveler, there is a short article about a bimillenary celebration this summer in Ljubljana, the capital of Slovenia. “Bimillenary” means it’s been 2,000 years since Caesar Augustus laid one of the first stones to establish the settlement as a Roman outpost. Two thousand years!

The highlight of the celebration will be a festival August 22-24 featuring military and civic reenactments. There will be tours of the old town and guides dressed as Roman soldiers (I hope they’re not as cheesy as the guys outside the Coliseum in Rome). Regardless, you can be the sure the cobblestone streets of Ljubjana’s ancient city center will be rocking next month. 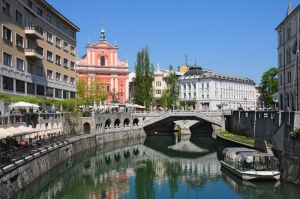 While there’s no way I can get to Slovenia for the upcoming festivities, I have to tell you that I’m starting to hear a siren song from that part of the world. A couple weeks ago I wrote about my “Wine Crawl for Wussies” and talked a little about the wonderful Slovenian immigrants who moved to this area years ago and cultivated vineyards in Northeastern Ohio.

What I didn’t mention is that in the years growing up with these friends, I always wondered where the heck Slovenia WAS. For the second half of the 20th century, Slovenia was a precious homeland that had disappeared. You couldn’t find it on any map because it had been swallowed up under the umbrella of Yugoslavia, a makeshift country created by Russia to include Slovenia, Slovakia, Croatia, Serbia, Bosnia, Macedonia, and more little countries and principalities I’m afraid I’ll inadvertently leave out in my ignorance.

I hope the maps below will help show you what this area looked like after World War II, then how it looks today. If you have a hard time finding Slovenia on the second map, it’s the little blue country sandwiched by Italy, Austria and Croatia. 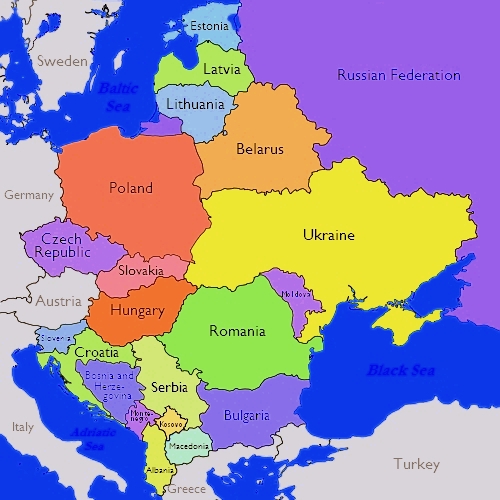 As I started reading up on Slovenia, I learned that the primary wine-growing region is around the country’s second largest city, Maribor, located in the northeastern section of the country. I’m guessing that at least some of the families I knew must have come from that area. Every year at my home town’s “Grape Jamboree,” some of our friends would dress in traditional costume and dance, looking much like the people in the photo below.

As a kid, all that I registered was the surface quaintness of the costumes and dancing, It was great fun to yell out to Char and Greg, our buddies wearing crazy hats and knickers as they danced on a float in the Jamboree parade.

Then years later, when my son Chris was a toddler, we stopped for lunch in a town outside Toronto on our way home from a vacation in Canada. There was an ethnic festival going on with people dressed in costumes and wearing sashes naming countries I’d barely ever heard of, like Estonia and Latvia, Moldova, Bulgaria. There were signs urging people to “never forget” their roots, their homelands. There was happy music and great food, but for the first time, I also realized the poignancy of their situation.

As you read my post, I wonder, do you have ancestors who came from countries that experienced things like this? One story in my family claims that when my Moravian paternal great-grandfather arrived in Cleveland, he slightly changed the spelling of his last name so he could pass as Bohemian to get a much-needed job. Moravia. Bohemia. Apparently the two weren’t always fond of each other. But now? Just part of Czechoslovakia. All gobbled up.

It makes me happy that my old friends can now point to a place on the map and say, “There. Right THERE is Slovenia, where my great grandparents lived.” Maybe someday I’ll return to Czechoslovakia and search for our Moravian roots.

But what I’m starting to imagine now is a trip that begins in Trieste (a city in Italy that spent many years as part of Austria), then meandering over to Slovenia and Croatia. I saw a little of Croatia on a river cruise on the Danube a few years ago, and now I’d like to see this beautiful country’s Adriatic coastline. (Any takers?)

The Italian port city of Trieste, photo from tangoitalia

When we’re fortunate enough to travel to, well, ANYWHERE – I think it’s exciting to stop and realize that we are witnessing history. Imagine the Roman legions marching through the settlement of Ljubljana two millennium ago. Think about countries that disappear, then are reborn. Think about how every place you visit has been called other names, claimed different borders.

Travel for vacation. Heaven knows we all need time to relax and regroup! But it’s fascinating and often very moving to learn about the history of your destination, too.