Well, first I have to tell you about a webinar I’m considering taking by a writer I admire, Josh Bernoff. He has a blog called “Without Bullshit” and his webinar is about Writing Without Bullshit.

I’m all for writing without bullshit. On the other hand, my blogs pretty much rely on bullshit to provide some degree of entertainment. I think my readers like my bullshit. Right, you two?

Now that I think of it, I’m guessing Mr. Bernoff would say that leading a blog post with information that is totally irrelevant to the subject of the post counts as a serious bullshit faux pas. My friend and mentor and sometimes-editor Jane Gassner would agree. Sorry, guys.

I will consider the webinar. Anyone who wants to weigh in on whether or not I need to eliminate some of the bullshit, feel free to comment here. 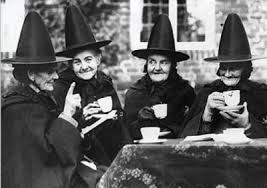 Happy Halloween. Here’s a photo that bears no relation to the topic of this blog post OR even to the irrelevant opening paragraphs. You’re welcome.

So today, after an absence of several months that I can’t explain, I no longer feel inclined to share more stories about my awesome trip to Alsace last spring. In fact, being old, I barely remember what I did in August, let alone May. Suffice to say, Alsace is fabulous and you should go.

I do, however, remember a fair amount of what happened in the last couple weeks. So before this, too, becomes a vague memory, today’s post is all about my recent experience flying from Cleveland to Orlando on Frontier Airlines.

Note:  When I say I can’t explain an absence of several months, I do not mean to imply that I was in a coma or abducted by aliens or anything noteworthy. No, I just lost track of time, at least in regard to blog-writing. This begs the question, is writing in my blog something I do when I’m not busy living my actual life? Or, maybe I just don’t like to write when I’m hot (not sexy, but sweaty)? I don’t know. But it’s October, and I’m back.

Another note:  I just got a FitBit and it’s squishing into my wrist which is resting on the keyboard as I type. I don’t like this. And I’m pretty sure I’m not even getting activity points for writing, let alone steps. Anyone know how I can lower the daily goal of 10,000 steps to, oh, say, 2,000? I want something achievable. But I digress. Again.

Be sure to allow PLENTY of time to check in with Frontier.

I’m conscientious and wanted to select reasonably priced flights to work a client’s conference in Orlando. The best deal appeared to be on Frontier, so I booked tickets for me and my bud and business partner-in-crime, Ginny. The program was held at the lovely Loews Portofino Bay hotel. This unique property actually looks like it’s on the Italian Riviera, but the little lake beyond the piazza winds around not to some gem of a village on the Cinque Terre but to City Walk at Universal Studios. Instead of taking the ferry to Vernazza or Corniglia, we ended up having dinner at Bubba Gump’s after sipping a margarita at – where else? – Margaritaville, where we watched sweaty, sunburned people leaving the park wearing Harry Potter capes and Minion tee-shirts.

Maybe I’ll write about Loews Portofino Bay Resort another time. Or, you can just visit the website yourself. If you haven’t consumed too much of the Disney Kool-Aid, you really ought to consider staying there if you have to go to Orlando again sometime.

I’m really all over the place today, aren’t I? Part of the problem is that I was almost done writing this when I got a phone call from my realtor (I have an offer on the house I put on the market at the beginning of April – yay!) and when I went back to finish writing, stupid WordPress hadn’t saved my last several paragraphs. Stupid WordPress. Bad.

Anything larger than this is considered a CARRY ON BAG and you will be charged big bucks on Frontier.

So here’s the deal with Frontier. When I booked our tickets, I knew I’d have to pay for checked bags. In fact, it costs more to carry a bag onto the plane than it does to check it. I actually like that because I’m tired of all the cheapskates who fly on “regular airlines” and try to cram the entire contents of their bedrooms into the overhead compartments. Very annoying.

So I ticked off “yes” for checked bags. However, I didn’t notice that I had to check off “yes” for both legs of the trip. Consequently, Frontier thought we were bringing suitcases to Florida, but leaving them behind. I think that sounds a little shady and that the airline should assume that we ARE bringing our suitcases back home unless otherwise noted. Right? We discovered this the night before we were to go home so we had to pay even more money since we hadn’t made it clear in advance that we wanted round trip tickets for our luggage, too.

Fine. When we tried to figure out how to pay for our bags to come home with us, we also learned that it’s all but impossible to talk to anyone on the phone who works for Frontier Airlines. Since Ginny was the one trying to do this, I can’t speak to the details, except to say that Ginny is the most good-natured, kind person on the planet – and she was pissed.

She did eventually learn that if we tried to check in at the airport, not only would checking the bags cost even more money, we would need to pay another $11 per person to get boarding passes. What? Yes. So, somehow the hotel concierge got us straightened out, printed the boarding passes, and we were able to leave Orlando the next day. 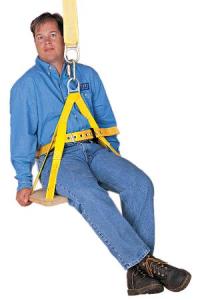 The cheapest seat on Frontier is this one: Five bucks for a swing and harness.

But wait. Did I tell you about seats? If you want to choose a seat on Frontier, you have to pay. The price of a seat varies according to where the seat is on the plane, whether or not there is an inch or two of extra leg room, and whether or not you want a seat belt (just kidding about that last thing). None of the seats recline, by the way. That’s fine with me because I’m sick of sitting with someone’s head practically in my lap, especially if I’m foolish enough to want to use my tray table to eat a snack or something.

Oh. Speaking of snacks, I guess you can buy some from the flight attendants but I didn’t look at the “menu.” You can have a complimentary cup of water, but will pay for coffee or soft drinks, etc. It’s kind of like being in prison in the air, now that I think of it. If you don’t have money for the “commissary,” no snacks for you, buddy. 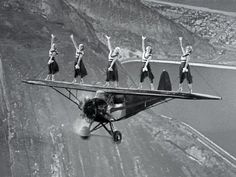 If you are willing to really go cheap, you can have standing room on the wings.

And finally, you’d better be on time and no fooling around. Sweet Ginny, who does like to push the envelope when it comes to flight schedules, I must admit, stood in line at the Frontier check in counter in Cleveland for nearly 20 minutes. When it was finally her turn at the desk, she was told she had missed the window for check in by two minutes. She thought they were joking. They were not. It cost her $99 to change to the next (nearly empty) flight leaving a couple of hours later.

I had taken out a loan to reserve seats across from each other on the aisle, but instead, the kid sitting in the middle used Ginny’s empty spot to strap in his big stuffed Mickey Mouse.

You thought I was joking, but no. Seeing polygamists in the St. George Wal-Mart never fails to entertain me. Yes, I know I’m a jerk.

I wish I could tell you I’ll never fly Frontier again, but before this first experience I had already booked flights to Las Vegas for Christmas. No, I am not spending the holiday playing the slots. My mother and I are visiting my sister in nearby St. George, UT. We will probably go to the local Wal-Mart to ogle the polygamists at some point during our holiday visit as there is not much to do in St. George if you aren’t busy keeping up with all the secret activities taking place at your local Mormon temple.

I am hoping to try fried cheese in the shape of Texas next week.

In the meantime, I’m excited to tell you that I am flying to Dallas to see my old friends Carol and Patsy this Saturday. We are going to go to the Texas State Fair, which I suspect will offer lots of great material for a blog post when I return. We will also eat plenty of great Tex-Mex food and drink margaritas and laugh until we cry. I can’t wait.

The only down side? Heaven help me, but I booked my ticket on Spirit Airlines. Have I mentioned lately how much I miss Continental?