How Italy’s art was saved during World War II

I am an inveterate reader. I just looked that up to be certain I’m using “inveterate” correctly and the dictionary said something like a “habit of longstanding.” I was one of those kids who hid under the covers with a book and flashlight after bedtime, so yes – inveterate definitely works for me.

When I travel, I used to bring at least three or four books with me to read on the plane and during down time in the evening before bed. Now I have a Kindle for that purpose and my carry-on bag no longer has the potential to be used as a lethal weapon. 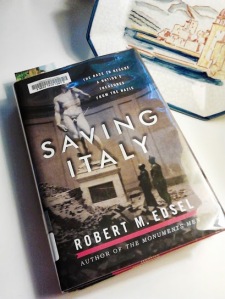 I thought it might be fun (for me – maybe for you, too?) to occasionally share information about a book I’m reading that is related to travel. Right now I’m reading a new release called Saving Italy by Robert M. Edsel. It’s the story of the “Monuments Men” – American military personnel who tried to work within the constraints of, well, WORLD WAR II to protect and save as many of the irreplaceable paintings, sculptures and notable historic buildings from destruction.

I would end up spending the better part of a day just trying to cover a smidgen of what this book addresses in detail, from the first days of landing in Sicily and then on to the “toe of the boot” of Italy, as the fighting made its devastating progress north to Naples, Rome, Florence and beyond. I remember hearing the names of battles at places like Monte Cassino and Anzio, but this book brings the past to light again in a way I’ll never forget – and especially if I am fortunate enough to return to Italy one day.

If you have ever stood in the Academia to experience Michelangelo’s David, or gazed in wonder at Botticelli’s glorious Venus in the Uffizi; if you have ever wandered through the crowds ogling trays of gold jewelry in the shops on the Ponte Vecchio or admired the legendary doors of the Baptistery; if you have fallen in love with Florence (and Rome, and Naples, and . . . ), then you will be astounded to read what the Italian people and their exquisite cities endured as the Allied troops forced the Germans to the North, one bloody inch at a time.

I did not realize that the Nazis blew up all the bridges, except the Ponte Vecchio, to deter the advancement of the Allies into the city. And, all the buildings on either side of the river flanking the Ponte Vecchio were flattened to rubble.

When you visit today, you would never guess such a thing took place. The bridges are beautiful. The buildings look like they’ve been there since the Medici’s ruled Tuscany. I was so surprised to learn that Florence had experienced such damage, and that the restoration was so carefully and successfully executed, today ignorant tourists like me can believe the city had been spared. 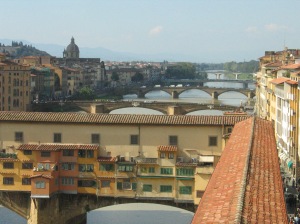 Florence’s bridges, with the Ponte Vecchio in the foreground

If you love Italy, if you love art, if you wander the cobbled streets in awe of this country’s precious buildings and sites of antiquity – read this book.

Hats off to the Monument Men, and to all the Allied troops and proud Italians who worked in the midst of a hellish war to preserve the treasure that is Italy for future generations.