I’m going to Liverpool next month. I can hardly wait to “Ferry ‘Cross the Mersey” and take a Beatles tour to catch a glimpse of the landmarks graced by the Fab Four.

If you wondered how old I am, you can easily figure it out now when I tell you that I was 12 years old when the Beatles first hit the U.S. scene in 1963. In the little town where I grew up near Lake Erie, about 50 miles east of Cleveland, Ohio, the strongest signal we received was from CKLW Radio in Detroit. The station apparently had a mega tower just across the border in Canada that allowed them to broadcast further than was allowed with AM stations in the U.S.

I’d listen to my favorite DJ every night, often sitting with my little transistor radio at the kitchen table to hear the music and latest news about the lads from Liverpool. I remember one night I lit a candle and sang happy birthday to George, along with every other Beatlemaniac following the DJ’s instructions.

I loved them all, but was especially enamored with Paul. I luved him.

I was thinking this morning how innocent I was. “I Wanna Hold Your Hand” was about as thrilling a prospect as I could expect. And the later song, “I Want to be Your Man,” fueled my imagination no further than believing Paul would want to hold my hand on a daily basis, perhaps even stealing a chaste kiss now and then. 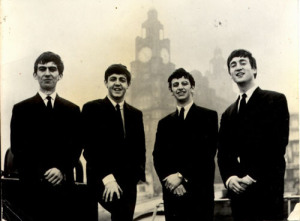 Photo in Liverpool, circa 1962 – thanks to Paul McCartney WordPress blog

When the Beatles appeared at Cleveland Public Hall I was fortunate to go with my friends Cynthia and Janice. Cynthia’s dad drove us and waited somewhere in the vicinity to take us home after the concert. We all had been warned that despite the late night spent standing on our chairs screaming at little mop-topped guys on a stage far away, there would be no excuses not to go to school the next day.

Who would want to miss the experience of being celebrities ourselves, having worshiped at the feet of the beloved Liverpudlians?

So now I’m going to Liverpool, 50 years later. As I take in the sights I only dreamed of ever seeing as a girl, I picture myself grinning madly each step of the way. Paul! I’m finally here! Eeeeeeeeeeeeeeee!

Anything else you think I should see while I’m there?

1 Response to Oh, those sexy Beatles