Silly scooting, at home and abroad

Hey! We’re back on the river, folks! It’s nighttime on the Danube, and our river cruise ship, the Viking Primadonna, is docked near the Serbian capitol of Belgrade. We had a great day onshore visiting the fortress (which was instrumental in keeping the Turks away from the rest of Europe, as you may remember from previous posts about fortresses and pesky Turks). We also saw a beautiful Serbian Orthodox church (below) under construction and wandered around historic downtown Belgrade and drove by a place where I think Tito used to grow roses. 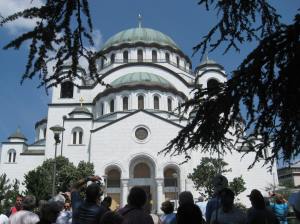 It was a lovely day and after dinner, our Serbian program director, the adorable Nevena, arranged for music and folk dancers to entertain us. I shot lots of videos, but it wasn’t until I went back this morning to browse through them that I found what I am now affectionately calling the Serbian Scootie Dance.

No, that’s certainly not what they called it. And there was far more to the dancing than this, but warped sense of humor that I have, I chose to post this dance for your amusement this morning. Have a look:

Now, what this reminds me of is one of the earliest exercise legends in Cleveland television history, the very fit and fabulous Paige Palmer. Back in the ‘50s Paige had an exercise program on WEWS-TV in Cleveland. She conducted her program dressed in a leotard and fishnet stockings, an hour every day, five days a week. She was kind of Cleveland’s Jack LaLanne, but prettier.

Much like the Serbian dancers, we would sit on the floor in front of the television and at Paige’s command, we’d scoot, scoot, scoot on our fannies (I think that was Paige’s chosen euphemism) with our arms pumping at our sides. Scoot to the front to the count of ten, then scoot backwards, repeat.

The scoot with Paige was more of a rocking, sideways motion that was supposed to (I guess) pound the fat off an exerciser’s butt and thighs. I can’t imagine that it was particularly effective, but it was fun and silly to do. What the Serbian guys were doing was different, but the Serbian scoot seemed equally silly to me when I watched the video again this morning.

I don’t want you to think I’m making fun of the dancers or of Serbians, for heaven’s sake. Wait until I post my next video demonstrating what an asshole I can be with just one drink under my substantial belt.

Silly is timeless and universal. Don’t you love that? I do.

3 Responses to Silly scooting, at home and abroad